The Nightshade are descendants of the reapers, who were descendants of the son of Pan Gu. When he was mortally wounded, he used the last of his strength to grant the reapers mortality so as to outlive him. The reapers came to Perfect World, and protected it from the shadows for many years until recently. They have since stepped into the light to aid the other races in defeating the Wraiths.

A race called the Reapers lived in the Realm of Garrow, home of their creator, the Divine Child Cangyan. After many centuries, an invasion by the Twilight Empire caused the Realm of Garrow to fall in chaos. Cangyan transformed into a golden dragon, sacrificing his life to destroy the invaders. With the last bit of his power he gave his children the ability to survive without him. Renaming themselves to Nightshade, they constructed a fleet of flying ships and traveled to Perfect World. The fleet was soon built into a floating city, which they named Dawnglory. As descendants of a Divine Child, they have a much longer lifespan than other races. 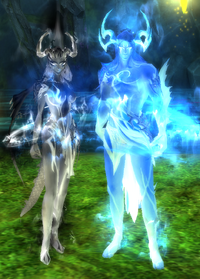 Nightshades in their reaper form.

Nightshades take on a humanoid form by default, with similar complexions to the earthguard. Despite official art depicting nightshades with horns, they do not actually have horns on their in-game model, except for in reaper form. Traditional nightshade hair in-game features colored streaks, however there are non-nightshade hair options for them as well. Their meditation is visually different from other races; the nightshade instead meditate in their reaper form.

Their reaper form is an ethereal-looking humanoid that possesses horns and a scaled tail. The color of the reaper is dependent on the class; duskblades are a gray-black, surrounded by a black and white aura, and feature glowing white eyes and white markings on the body, while stormbringers are blue, surrounded by a blue aura, and feature glowing blue markings on their face and body.

Dawnglory is the capital city of the nightshade, located on an island in the northeast corner of Perfect World. It features several flying ships, including a massive ship that is lined with guards on each side.