As of the the PWI Genesis expansion level 3 factions can create their very own instanced Faction Base.

Once created, an NPC will serve to teleport faction members into their base of operations. Each Faction Base is set up with five separate wings within the structure. These wings need to be constructed and upgraded by the Faction Leader as well as his or her members via coins, materials, and star levels. Members of a faction will be able to enjoy exclusive power-ups and services, have access to special gear, and can take extra quests that provide great rewards and faction contributions. You can upgrade the structures in the faction base to get better and more services.

Creating a Faction Base[]

A faction should first activate its base, and then upgrade it to provide services to the members. The base is activated at the Faction Base Manager (573 660).

Level: The faction base can be upgraded by collecting Construction points. These are gained through the members' contributions. They can be donated at the Faction Manager located in the Hall of Loyalty to give the base more EXP. These donated points are separate from your spending points. Donated construction points will not affect your contribution points.

Health: This value ranks the activeness of members (daily total Contribution income). It will shrink day by day. If the shrinking rate is higher than the increasing rate, as the number reaches 0, the base will be destroyed.

Faction Materials: Materials can be used to construct or upgrade faction structures. Members can complete quests taken from Hall of Loyalty to acquire faction materials. Members can only get materials for their own race:

Materials can also be gained by destroying enemy structures.

Decommission: Faction Base structures can be destroyed in faction base battles. If the Health of your faction base reaches zero, it will be decommissioned.

You can check your faction base stats at the Faction Base Manager.

Where you'll find Faction-centric quests. These quests consist of 1 Daily Faction Exam Room Quest, and 2 Mob Quests (rewards will increase upon leveling wing); each rewarding Materials depending on your race, Faction Contribution and Construction Points. You will only get one attempt to answer the Exam Question correctly. Your answer must be submitted within 10 minutes in order to receive credit.

As the Hall of Loyalty wing increases, Faction Exam Questions and Answers difficulty level increases, as well as the rewards. However; mob difficulty remains the same, but rewards increased. From Monolith level 3 on you gain access to the Wandering Artist daily faction quest which gives 150 faction contribution.

By completing faction quests members can gain Contribution. By spending Contribution and coins, players can purchase gear or take special quests. The total Contribution a player has compiled is called Merit.

When your Merit reaches a certain level, you will gain access to purchase or exchange quests. You can check your faction merit in the Faction Status Window. The Faction Status button is located in the top right corner of your screen.

The format of the faction status window is listed as follows:

The Faction Exam Room is a daily quiz that faction members can take for extra Contribution. For each Monolith level is a different set of multiple-choice questions. Answering correctly will award Contribution. The exam has a time limit of 10 minutes and can fail if the timer runs out. The exam can also fail if the player leaves the Faction Base or answers incorrectly. It can only be attempted once per day, even if the player fails the quest.

The amount of Contribution awarded for a correct exam answer is as follows:

Contribution and Experience From Kill Quests[]

Here you can exchange faction materials and Divine Contract items.

The Faction Leader may also exchange materials from different races for other materials at a 2:1 ratio.

You will be provided with helpful buffs here, or can buy potions and tomes. The buffs here will last one hour.

Provides training quests that reward with EXP. Taking such quests will cost Feat Tokens, each of which cost 1 Contribution and 1 coin.

Upon the opening of a faction base, it will have 5 grade one structures. If a structure is destroyed in battles, it can be rebuilt.

Faction structures can also be upgraded to provide more services.

To upgrade a structure, the faction leader must have the required coin in their inventory at the time. 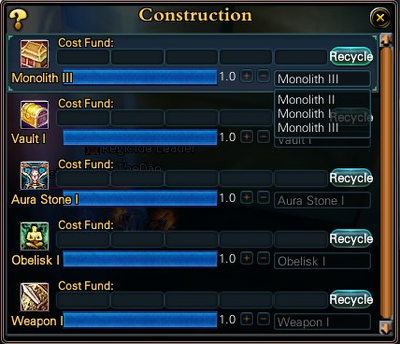 "Cosmos" describes the upgrade tree for the faction base structures. You must upgrade a certain technology in the Cosmos before you can upgrade or construct corresponding structure. 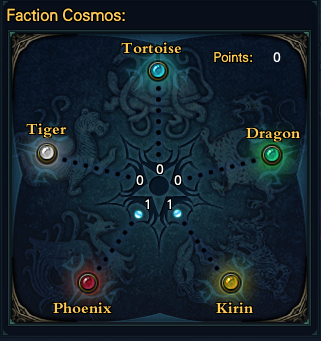 You need to spend Tech Points to upgrade base structures. Every time the base levels up it gains 1 tech point. At level 10 the base will start to get 2 points for every level up. The cost to upgrade in tech points goes up with higher structure levels.