Faction Leaders interested in testing their mettle can sign up for Dragons' Conquest by talking to the NPC Rong Utsin at 585 665 in Archosaur and paying 10 million Silver Coins to select the territory they wish to invade. Sign up starts on Thursdays at 3:00 AM PST and ends on Thursdays at 3:00 PM PST. Factions will not know who their opponents are until 30 minutes before the battles begin.

On Saturdays at 10:30 AM PST Ye Tze will spawn next to Rong Utsin at 585 665 in Archosaur and allow players to enter Wargod Gulch. Inside Wargod Gulch, players can talk to Zur Seezan at 11:00 AM PST to enter a Dragons' Conquest battlefield. A battlefield selection window will appear upon speaking with Zur Seezan. On the left players can pick the tier of the battlefields and on the right they can select a specific battlefield they wish to enter. The battlefields are only accessible if the Faction owns them or currently has a battle against another Faction in the respective battlefield.

Players can enter and exit a battlefield at any time they wish until the battle is over, however players cannot enter a different battlefield once they have chosen one. It is advised to follow the Faction Leader's instructions to avoid entering the wrong battlefield.

Players can exit a battlefield by talking to Len Chue inside their base. They will be teleported back to the Wargod Gulch, which they can exit by talking to Wanli.

Both Factions start the battle with a Battle Score of 2000 points. These points can be depleted by killing enemy players (one point per death), destroying Resource Towers and killing the middle dragon. 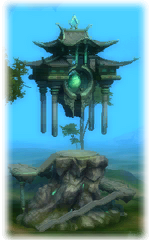 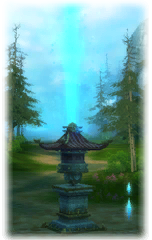 Control Towers exist on the east and west sides of the map, before and after the Crystals. When a Faction has captured a Control Tower, the Tower will then stun and disrupt any enemy players that run through the Control Tower's area. Control Towers can be captured by digging the blue crystal inside its area. The player will have to use immunity while digging to avoid getting disrupted by the Tower. There are four Control Towers in total. 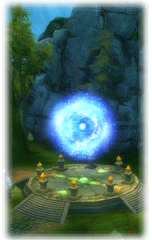 Two dragons, one for each Faction, will appear on top of the Tai Chi Teleport Point at the center of the battle map. Killing the enemy Faction's middle dragon will reduce their Battle Score by 200 points. Middle dragons spawn 20 minutes before the battle timer ends.

Each Faction has a dragon sitting inside their base. If the enemy Faction kills the dragon the battle ends and the enemy Faction is declared the winner, therefore defending the dragon is very important. The dragon will instantly kill any class except for barbarians. A barbarian will be required to aggro the dragon and tank it while everyone else deals damage to the dragon, kills enemy players and protects the tanking barbarian.

Dragonlord's Coins can be exchange for time-limited Health and Mana charms inside a Dragons' Conquest battlefield by speaking with Vanguard Quartermaster inside the base. They can also be exchanged for special mounts at Rong Utsin at (585 665) in Archosaur.

Dragons' Conquest has seasons during which Factions fight each other to get in the rankings and win special rewards. The Faction Leaders of the winning Factions will be contacted by Customer Support at the end of each season.

Note that rewards for each season are subject to change at any time, including after the season ends. After a new season begins, the reward list may also change.