Hello and welcome to the beginner's guide. Hopefully this is enough to get you started into this game. You can also try talking to other Perfect World players (both in game and in the forums) and you'll often get a lot of help if you just ask for it, so don't be afraid to ask.

You will first have to create an Arc account here and download the Arc client, then the game, before you can play. The download may take a long while, so be prepared. You will want to read the game's Terms of Service because your lack of knowledge will not keep you out of trouble if you don't play nice or try to hack the game.

Once you start the game and sign in you will have to create a character that you will play. The game offers six different races with two to three classes for each race:

Each has it's own special abilities and you can make 8 different customized characters on a single account. When you make a character, experiment with the customization adjustments so your character will look just as you want to be. After you finalize your character you will have 24 hours to make a few more adjustments to your character's appearance, after that time expires it becomes permanent. You can of course delete a character at any time but it will take a week for the character to be deleted off the server. During that time you can choose to restore your deleted character if you want it back.

Once you have made a character you will log it on to the server of choice and will appear in the starting location of that character's race and class in an instance called Celestial Vale. A help window will pop up. You should read this in detail and keep the help window active for as long as you need help while playing.

There are a lot of things to learn but not all of it needs to be learned right away. Before you start to actually play your character you should check the User Screen interface and familiarize yourself with it. One of the more important things on the interface is the 2 "Quick Launch Bars". These can be moved and opened to show all the available spaces to place the icons that activate your skills or make changes to your character.

Here is a quick overview of what you can do to setup the Quick Launch Bars (QLBs):

To add new skills or replace the ones you dragged off the QLB drag the skill icon from the Skills window to a slot on the bar. Now when you want that action while playing just click the icon that is on the bar.

First thing to do is to talk to the Guide NPC (Non-Player Character, the game's characters for interaction with players). You will know you have quests at NPCs because they will have a Shield icon over their head. Most of the time you will want to take the quests that they offer.

My advice is to get every quest you can while in an area, check them out and then do all of them. Sometimes you won't want to do a quest after checking it out because it a special event or quest chain you might not be ready for.

Now you are on you way, so as long as you read the help you can start to get the hang of playing your character. PWI does a good job of allowing you the gradually get the feel of what to do and as you progress you will learn new ways to speed up your leveling and be a better player.

Don't forget to check out the General Information page for some general information on game mechanics.

Here is a handy advance method to fire a number of skills one after the other so you don't have to click the skills individually each time. Once you learn to use your skills you should make a Macro that can combine selected skills into a package and assign one icon to put on the QLB, as seen in slot #1 on the QLB graphic above. Clicking the Macro icon will fire the skills. The one thing that makes it difficult is choosing the correct sequence of skills in the macro. Such thing as skill cooldown, mana depletion and interrupts may interfere or prevent the next skill from being fired causing the macro to stop.
From more information see the Macro Combo Guide Wiki page.

Questing is where you speak to an NPC (Non-Player Character) to get a quest with a target/objective with a reward at the end of it. If you press Q you will open your Quest Log. Here you can check what quests you have accepted and what other quests are available for your level range. Click on NPC names, monster names or coordinates in the quest log will cause your character to Auto-Path to them. You can also choose to press "Track" so you can have a visible list of current quests on your screen even when you have your quest log hidden.

The user screen is where you get see everything that is going on around you and how to talk to friends, etc. Here is an example of what the user interface (UI) may look like: 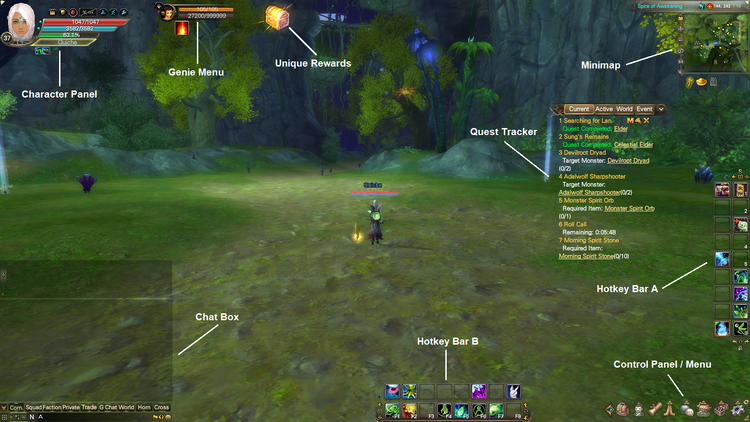 Armor: You can buy armor from NPCs with "Tailor" in their name. The more you level, the more armor you can wear. Also, as level you can get better armor.

These NPC vendors can be found in any city or town/village. Armor and weapons can sometime be acquired from monsters and quests, and some of these weapons may have sockets in them. A socket is a place where you can put shards/gems that you get throughout the game, from the "Merchant" NPCs and that will add a bonus to your armor and weapons, such as +5 Magic Attack.

Monsters (called Wraiths) are placed all around Perfect World and have set levels and elements.

Certain monsters will be harder to kill than others due to their rank. Some level 30 monsters may be easy to kill but some may be a lot harder, and you can see this because they will have a design around their name bar.

The Boutique contains rare and normal items, such as Fashion which are used to make your character look different, Mounts, and various other things that can make your game more fun or earn you some money.

Links to FAQs on other pages:

PWI Forum is a good place to find game information and discussion topics.

PWI's Fan group Page to socialize with other players and find help.

PWI Database is a good place to look up items and figure out how they work with other items.

Community Tools for a list of useful tools developed by players for players.