Adventure Kingdom, also known as Wonderland, is an event location added with the Wonderland expansion. It is available for players that are level 80 or higher and have completed their Aware of Vacuity cultivation. The Adventure Kingdom is a theme park owned by Tremolo the Tiger.

The Adventure Kingdom was designed based on the five big capitals of Perfect World: Archosaur, Neverfall, Durna, City of Peace and Glacier City. It is filled with various attractions and activities for players to enjoy. Some activities may also reward players with titles or Adventure Coins that can be exchanged for goods.

Guard Seven helps adventurers investigate missing children in Archosaur, eventually discovering a portal to Adventure Kingdom, a magnificent amusement park run by Tremolo the Tiger. It is said that Tremolo's ancestors visited all of Perfect World's five great city-states, spending centuries studying their architecture and incorporating it into Adventure Kingdom. Eventually, Tremolo inherited the park from his father. In his youth he loved the thrill rides, and as he got older he made many wonderful memories with various girls enjoying themselves in Adventure Kingdom. Eventually, he decided to open the park to the residents of Perfect World as well. 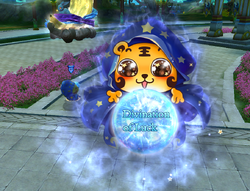 Divination of Luck from Larpa the Wizard.

Players can obtain their daily Divination of Luck from Larpa the Wizard in Archosaur Square. The divination will give players their daily fortune such as their lucky number, lucky color or what they should do or shouldn't do that day. The divination has no purpose other than entertainment.

Larpa the Wizard will also give players a time-limited pass. The pass will allow players to complete a few, short daily quests to obtain tickets that will allow them to play the Adventure Kingdom's games. The name of the pass will indicate the area in which players can find their daily quests. Daily quests will be activated automatically upon receiving the pass and can be found in the quest log. The quests must be completed within an hour. All quests that are completed after the pass has expired will fail.

After completing the park's daily quests, players will receive a time-limited Adventurer's Casual Ticket which lasts 8 hours, and some special time-limited tickets that last 24 hours. Casual tickets are used for practice and can be used as many times as the players wish. Special tickets can only be used during specific days and time frames, but will reward players with Adventure Coins that can be exchanged for goods. The only games that require tickets are the Shooting Gallery, the Whack-A-Mole, the Drift Race and the Tiger Gauntlet.

Players can participate in each game by obtaining time-limited tickets with the daily divination quest from Larpa the Wizard in Archosaur Square. Each event, except the Tiger Gauntlet, can be run infinitely using an Adventurer's Casual Ticket, however this will not award Adventure Coins nor will it count towards any titles. Players can receive rewards from each event using specific event tickets at certain times on certain days. 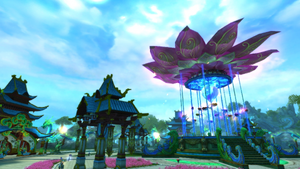 The Goldfish Flower in the Archosaur Square.

Archosaur Square is the central area of the Adventure Kingdom. It is based on the capital city of the Midlands, Archosaur. Players will arrive in the Archosaur Square upon entering the park. In this area, players can find Larpa the Wizard to receive their daily Divination of Luck as well as their daily pass to complete their daily quests. Magician Zoshan is located close to Larpa the Wizard, and he will give players their daily Message Bottles and Message Hooks. A mailbox and a banker are also available in this area.

The Peach Blossom Cove is located in the northern part of the Adventure Kingdom. It is filled with beautiful peach trees. 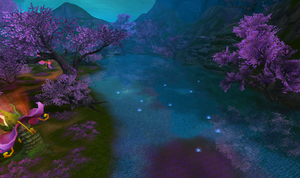 The Kite Pond of the Peach Blossom Cove. 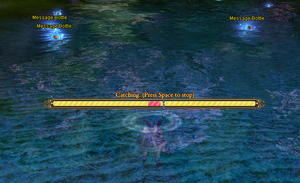 A player using a Message Hook.

Message Hooks are used for fishing in the Kite Pond's water. Players may pick up Message Bottles from other players or they may find other surprises. When a player uses a Message Hook, they will be put into a fishing mini-game. A bar will appear on the screen with a marker that constantly moves across it. Pressing the Space key will make the player character use the hook and receive whatever they caught.

If the player stops the marker in the yellow area they may receive one of the following:

If the player stops the marker in the red area they may receive one of the following:

Players can exchange 100 Sand in Bottle at Magician Zoshan for unique titles. 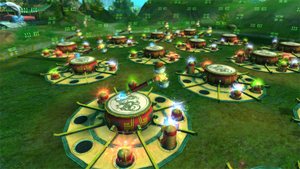 The Whack-A-Mole game in the Verdant Sea. 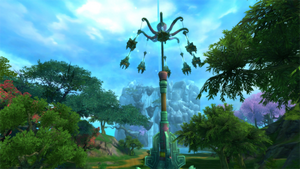 The Whirling Flash in the Verdant Sea.

Once a player participates the Whack-A-Mole game, they will have to rotate their camera to face the ground. There they can control a hammer to hit wooden dummies by right-clicking and hovering their mouse over them. Hitting red wooden dummies will grant 3 points per hit. Green dummies will give no points. 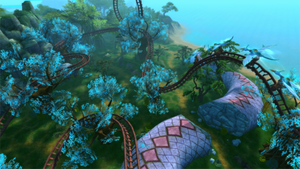 The Pterosaur's Flight in the Cretaceous Vale.

The Cretaceous Vale is located in the southeast area of the Adventure Kingdom. It features a giant snake which is actually a short dungeon. Players can enter this short dungeon through the snake's mouth. 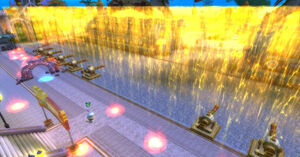 The Shooting Gallery in the Mandala Palace.

Once a player participates in the Shooting Gallery game, they will control a canon to hit targets on the other side by right-clicking and hovering their mouse over the target they wish to hit. When a player hits the center of the target, marked by a red color, they will receive more points. Targets that are harder to hit will also grant more points. Players will be turned into a tiger and they will have to run through 45 checkpoints in the proper order throughout the entire map of the Adventure Kingdom. An icon will appear under the player avatar with a number indicator showing the number of checkpoints the player has gone through. Checkpoints may sometimes take a couple of seconds to register a player so it is advised to pay attention to the checkpoint indicator to make sure no checkpoints were missed.

There are two types of emblems players can acquire:

A window at the bottom of the screen will show a list of skills. Number 2 and 3 are the traps players can lay down. Pressing or clicking one of the two numbers will activate a circle around the player indicating the range of the area in which they can lay down the trap. The player can then left-click anywhere on the screen that is within the circle to put down a trap. When a trap is laid, the corresponding emblem will be consumed.

Players can receive a brief speed boost by running through the floating green circles with a plus sign icon. Players can also collect Immortal Emblems by running through the floating yellow circles with a question mark icon. Immortal Emblems will grant players invincibility for a short time allowing them to be immune to any type of trap. A window at the bottom of the screen will show a list of skills. Pressing or clicking on number 1 will activate the invincibility and consume the corresponding emblem. 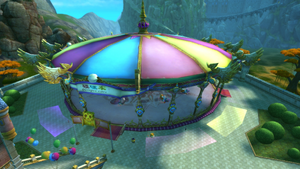 The Drift Race of Castle of Wondrous Fate.

Once the Drift Race begins, players will control an animal-shaped bumper car. They can run into other players' bumper cars and knock them back to reduce their health. Colored orbs will appear around the Drift Race area and players can gain positive or negative effects by running through them.

A player's score is equal to the player's health at the end of a Drift Race game. The players with the highest health will have the highest score. 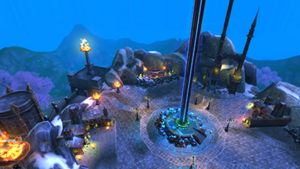 The Horizon Leap in the Frost March. 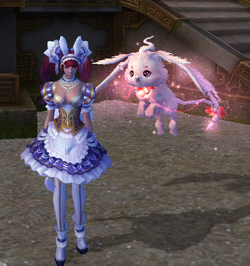 Every hour, three random NPCs will appear in various locations in the Adventure Kingdom. Each NPC will give players a quest. Completing the quest will reward players with one Turo Adventure Order and 500,000 experience points. Each one of these quests can be completed once a day.

The first 10 players to complete the Tiger Gauntlet will receive an additional reward of 2 Smiling Adventure Coins. 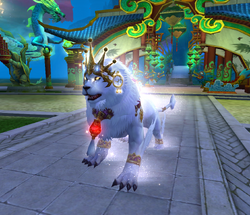 The Snowfield Lion mount, a reward from the Adventure Kingdom. 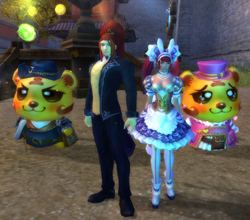 Other rewards can be exchanged using Turo Adventure Orders, obtained from red quests found randomly throughout Adventure Kingdom. Most prizes that can be redeemed are time-limited and purely for cosmetic purposes.